— Novita has been supporting young people to achieve amazing things every day, since 1939.

From the very beginning to the early 1960s

When we launched in 1939 under a different name (the Crippled Children’s Association of South Australia) we had a single, remodeled home on the Esplanade, Somerton Park with 27 beds, called Somerton Home.

The home accommodated a maximum of 50 children living with polio, and all up, our staff supported around 200 kids through day programs and a vocational guidance program.

The South Australian Government supported the running of the home through an annual grant of £2,000. 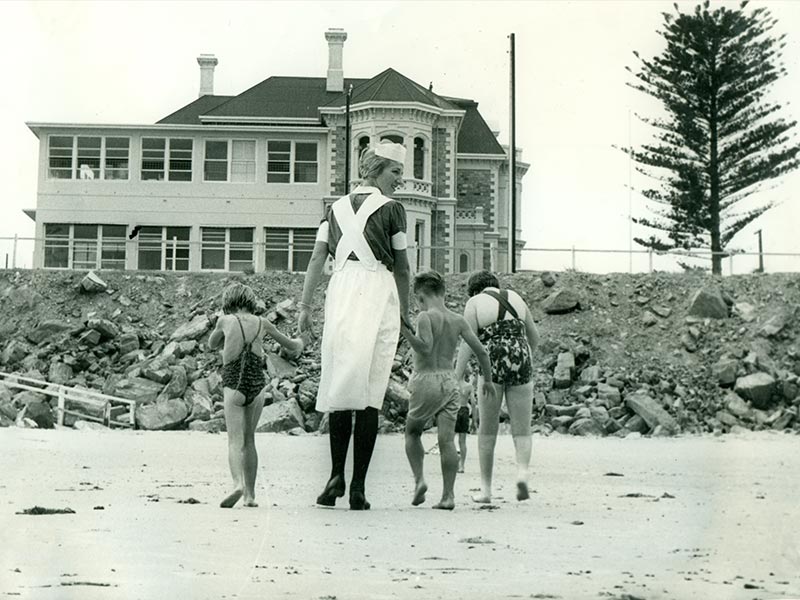 Kids on the beach outside the Somerton Home

In 1944 we expanded our supports to kids living with cerebral palsy before opening the first school for kids living with cerebral palsy at the Adelaide Children’s Hospital, along with a clinic, on 6 March 1946. The school was founded under the guidance of Director, Miss Daphne Lorraine Gum, who was later awarded an OBE and OAM for her groundbreaking work and tireless dedication.

The Adelaide Children's Hospital from Sir Edwin Smith Avenue, about 1880

In 1951 we began offering services to children living with neuromuscular diseases.

In 1952 we purchased Ashford House at 87 Anzac Highway, Ashford, with assistance from the State Government and used it as a school and therapy centre for children living with cerebral palsy.

Between 1956 and 1957 rates of polio dropped significantly because of the introduction of a vaccine.

In 1965 we purchased a property adjoining the grounds of Somerton Home, to be used as an Occupational Therapy Department and kindergarten. In the same year, we also acquired Marshfield House, located at 10 Mortimer Street, Kurralta Park, which was used as a residential annex for the children and families of Ashford House.

Miss Telethon visits our kids in 1970

In 1970 a committee was formed to look for a larger hub for Novita, and in 1971 the South Australian Government allocated 8.1 hectares of land at Islington (now called Regency Park) for us to build a new, state of the art, centre for excellence in 1973.

In December of 1973, construction started on the new building, that we still use, at 171 Days Road Regency Park, and in 1976 our kids from Somerton Home and the Ashford House School moved in. The total building cost of $5.4 million was subsidised by the Building Fund Appeal, run by Novita, which raised $2.25 million in donations from the South Australian community. This building incorporated residential accommodation for country clients, a school and therapy services for 147 children living with physical disability. 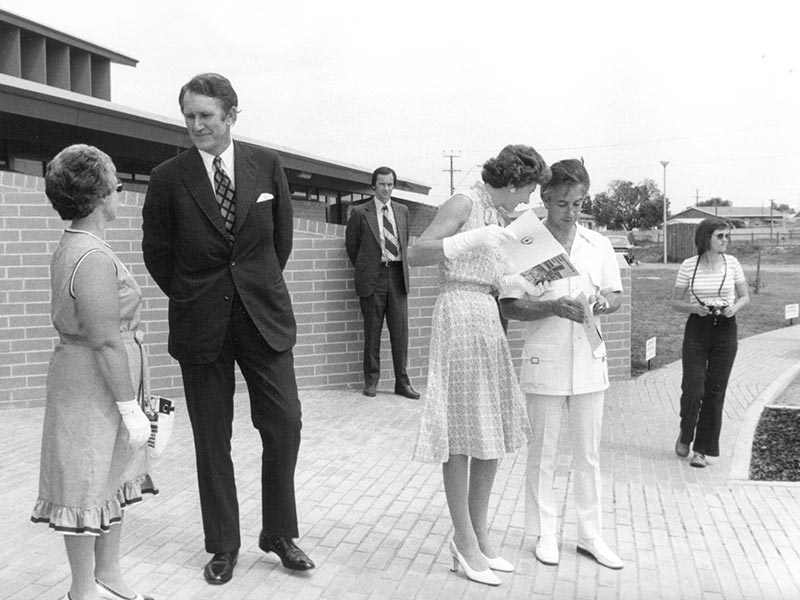 Our Regency Park office in 1976

We also established our Orthotic Department in 1976. The department’s work included making and repairing braces, special seating, walking aids, wrist supports and shoes. In 1976, Dr Barry Seeger, a Biomedical Engineer, was appointed the Chief Engineer of Orthotics and Orthotics Research, and in 1978 the department was renamed Rehabilitation Engineering. By the late 70s, we were supporting 242 children.

Therapy pools at Regency Park in 1979

In 1980, the Research Unit was established by Dr David Caudrey, a research psychologist, with the assistance of Miss Denise Wood, a social worker. The unit was responsible for investigating the needs and feasibility of establishing mobile teams and independent living for young adolescents and adults living with disability in South Australia. Research undertaken by the unit was funded by grants from the Channel 10 Children’s Medical Research Foundation (now the Channel 7 Children’s Research Foundation). 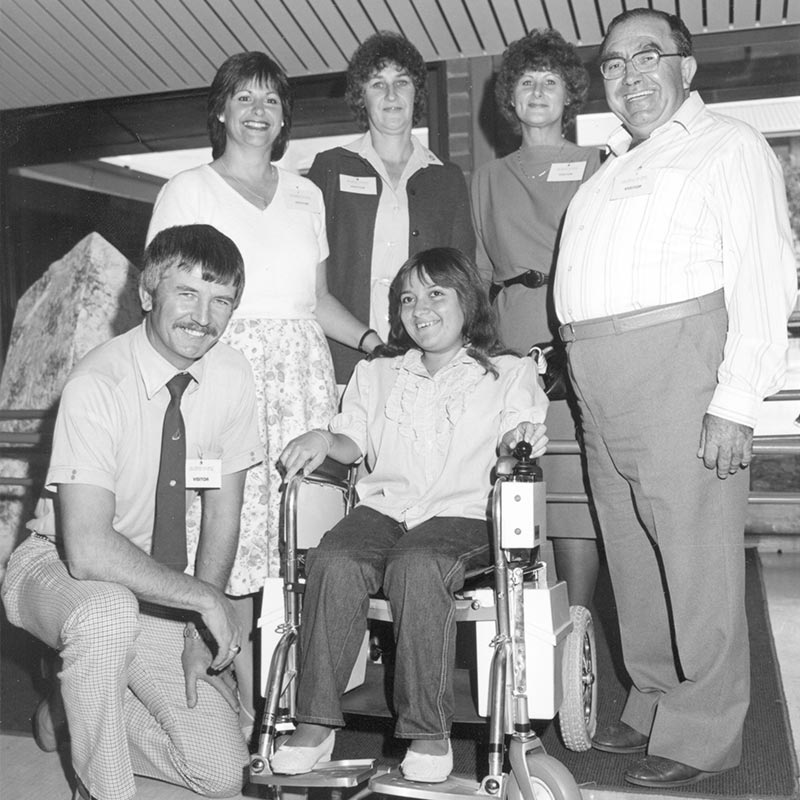 Presentation of a motorised wheelchair in 1983

In the mid-80s we started providing services to kids in regional South Australia. We celebrated our Golden Jubilee in 1989. By now, we employed 330 staff and supported 196 day students at the Regency Park school and 516 kids across South Australia. We also supported 118 families in their homes, 158 people in employment and training programs, and 24 people in independent living arrangements. 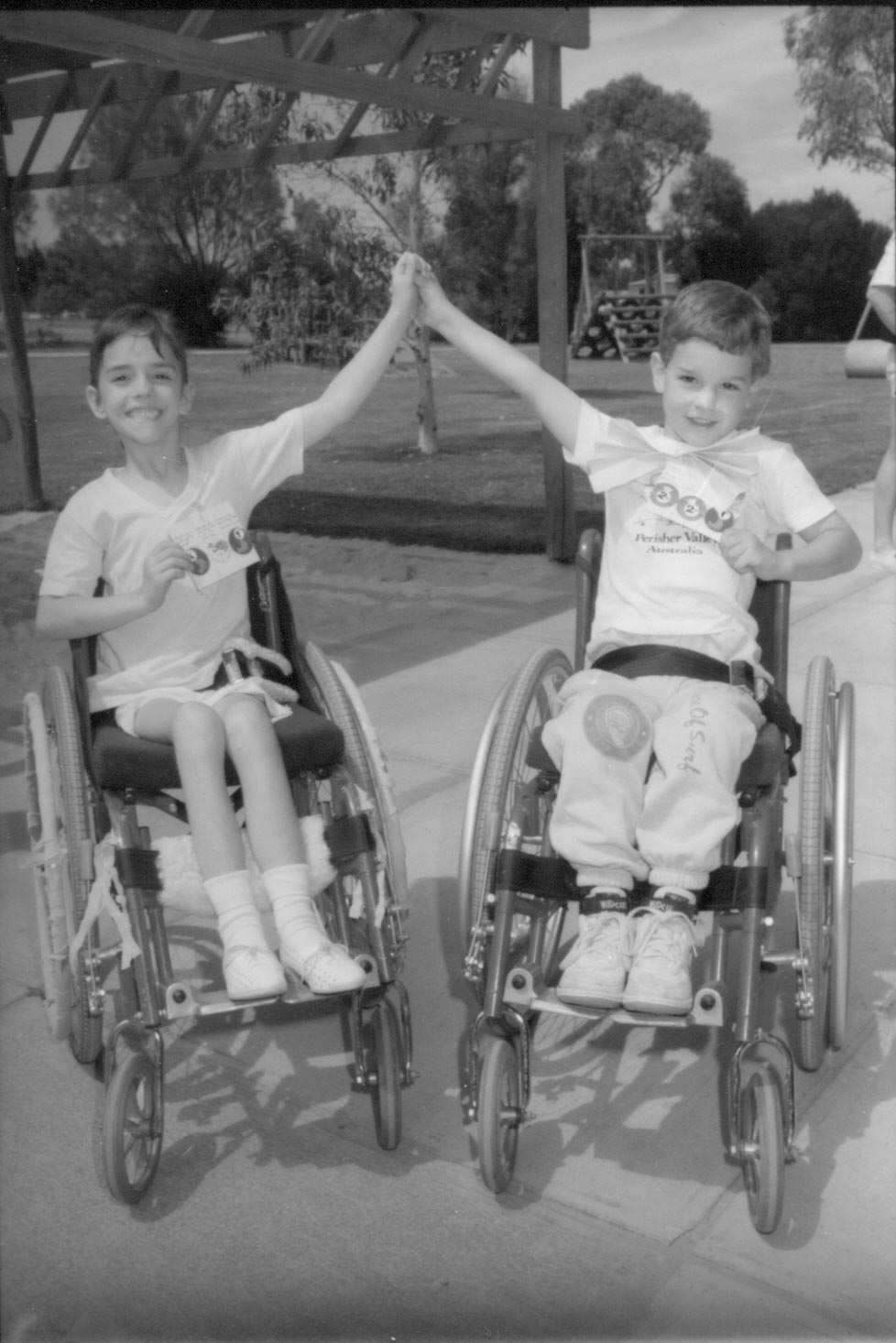 Also in 1989, we established what is now called the Novitatech Test laboratory at Regency Park. It was created to assist the International Standards Organisation (ISO) and Standards Australia produce a range of quality and performance standards for wheelchairs and other rehabilitation equipment.

The Test Laboratory still operates today and is accredited by the National Association of Testing Authorities (NATA). It provides independent testing of medical and disability products to Australian and International Standards.

The 90s and the noughties

In 1992 the Regency Park Centre residential facility was closed to focus on inclusion of kids within the community. A year later, services were exchanged with the Spastic Centre of South Australia (SCOSA), and we increased our therapy services by providing therapy for all SA kids living with physical disability. In 1997 we commenced working with the Women’s and Children’s Hospital to provide medical rehabilitation services to children living with disability, recovering from surgery. Also that year, a senior researcher with a background in allied health joined the team and Novita expanded its research activities to include clinical research projects – our first foray into a multidisciplinary approach to therapy and rehabilitation.

In September 2002, the Board approved a redevelopment project at Regency Park to upgrade the day centre, and carry out significant maintenance to comply with current building and fire safety codes. As part of the redevelopment, the villa complex was sold to the Port Adelaide Central Mission and space in the day centre was leased to the Intellectual Disability Services Council for the Western Options Co-ordination Office.

In 2003, we undertook a strategic review of our service delivery policy. We decided to focus on our core business, namely the provision of therapy, equipment and family support services to children living with disability. As a result, a decision was made to transfer our adult therapy operations, Communication and Therapy Services (CTS) to the Disability Services Office, before it was transferred to the Independent Living Centre.

2004 was a turning point for the organisation when we changed our name to Novita Children’s Services. ‘Novita’ is a combination of two Latin words – ‘nova’ (meaning new) and ‘vita’ (meaning life).

In 2005, through the Australian Government-funded Inclusion Support Program, Novita further expanded its services. The program enabled 400 children living with disability, Indigenous children and children from culturally and linguistically diverse (CALD) backgrounds to better access community-based services such as childcare, Out of School Hours Care and vacation care through Novita. Novita supported close to 100 childcare centres across the State to equip their staff with the skills and knowledge needed to create quality, inclusive environments for children.

In 2011 we opened a new hub for our kids and teens at St Marys and established a wholly owned subsidiary, CareFirst Pty Ltd, to support our entry into the fee-for-service market. In 2012 we acquired a new business and renamed it Community Options SA (COSA) – subsequently renamed Novita Community Inclusion - to provide day options, respite, recreation and in-home care to children and adults living with disability.

2013 saw the introduction of the National Disability Insurance Scheme and the commencement of trials in a range of geographical sites across Australia to different age cohorts. The trial in South Australia focussed on children up to the age of 18, which saw Novita heavily involved in the early development and transition to the NDIS.

By the time the NDIS commenced its official rollout across Australia in July 2016, Novita had the majority of its clients already on NDIS plans. 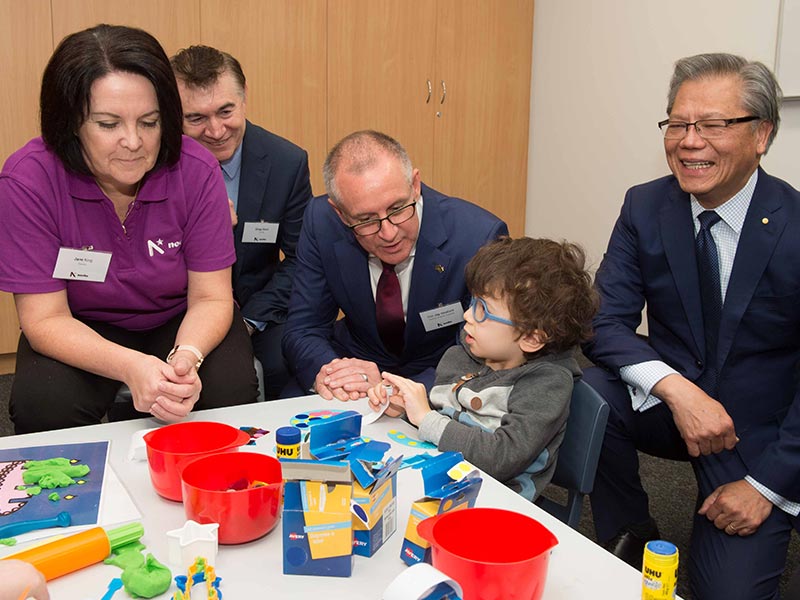 In 2017 we opened a new office in Elizabeth, Whyalla, Port Lincoln and Broken Hill, and expanded our services to adults living with disability. We also launched a refreshed, contemporary brand.

In May 2018, Novita also opened a brand new hub in Murray Bridge. At least 60 regional families now benefit from access to locally based therapists, more group and community based programs, and telehealth facilities.

In January 2019, we announced the sale of our Regency Park Centre, with a new state-of-the-art headquarters and therapy hub to be developed at Hindmarsh. We also opened a new hub in Broken Hill in February providing a permanent base for our services and supports for people living with disability in that region. On May 23, Novita celebrated 80 years of service and commitment to the South Australian community. And, on October 1, following a vote in favour of a merger by members of both organisations, Novita and scosa became a single entity, creating a unique, leading disability service provider offering a continuum of support for people living with disability at all stages of life.

A new era began for us in July 2020 when we completed the transition from Regency Park to four new state-of-the-art facilities in Adelaide’s west.

After being our home for more than 40 years, the Regency Park Centre was no longer meeting the changing needs of our clients and their families, and wasn’t going to support our plans for growth and expansion, as well as future service delivery models.

Novita’s Central Therapy hub on Port Road at Hindmarsh provides a modern and accessible facility incorporating the latest in technology and evidence-based therapy techniques to provide our clients, and their families and carers, with an enhanced experienced and the best-available disability services and supports. The hub includes unique features such as an outdoor activity space and sensory garden, a training kitchen, vibrant and flexible therapy spaces, welcoming staff facilities, and the Novita Star Café.

A purpose-built Novita Health hydrotherapy and gymnasium facility at Welland was also developed to meet the therapy and rehabilitation needs of people of all abilities. The pool and gym facility offers a broad range of movement and mobility programs for people living with disability, as well as treatment and support for people of all ages and other health and rehabilitation needs.

A new home for our equipment and assistive technology business unit Novitatech was also established on South Road at Thebarton to showcase and deliver innovative and customised solutions for our clients. The new hub features an Assistive Technology showroom, clinic rooms, a fully-equipped orthotics workshop, and Novitatech’s respected Test Laboratory.

The Hindmarsh Central Therapy hub and the other new facilities confirmed our status as an innovator in Australia’s disability sector using science, emerging technologies and research evidence to deliver the best possible outcomes for people living with disability.

Things have changed a lot since the 1930s, not just at Novita.

The introduction of the Disability Discrimination Act in 1992, the ratification of the United Nations Convention on the Rights of Persons with Disabilities in 2007, and the launch of the National Disability Insurance Scheme have been life changing for people living with disability and their families. With continued advocacy, innovation, technology and inclusion, the possibilities are endless for people living with disability.

We’re excited about the future!

The evolution of our brand

Let’s travel back through time …

Novita has, and continues to be, guided by a Board of dedicated professionals, led by a Novita President, and we have had the honour of hosting notable Novita Patrons, Patronesses, Vice Patrons and Vice Patronesses. 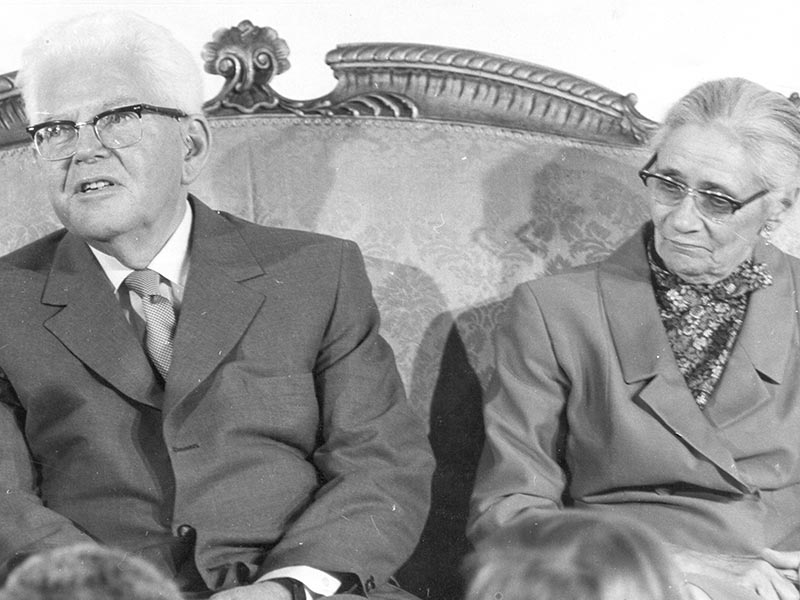