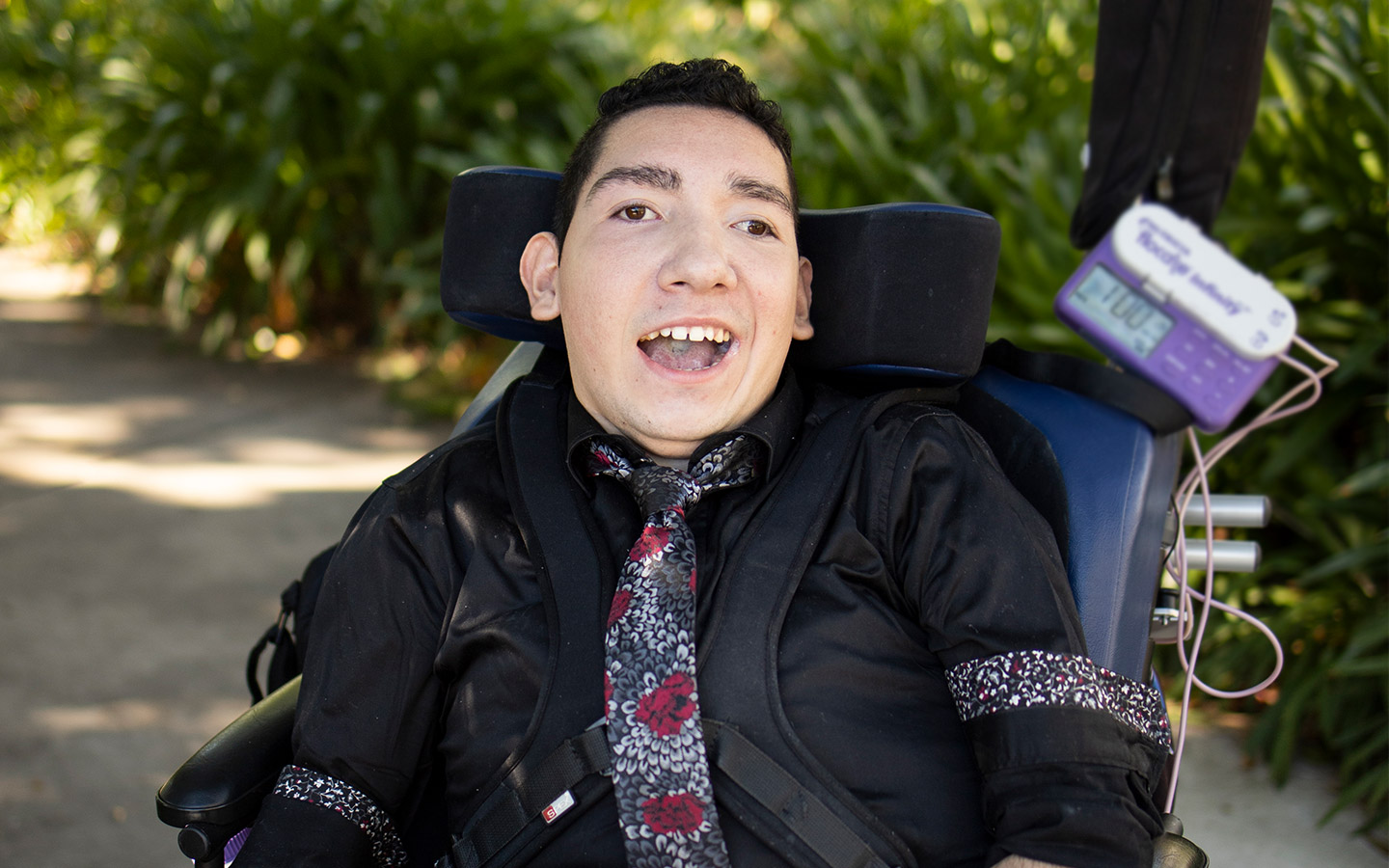 Christopher Graham loves music, and he loves guitars. Among his most prized possessions are two guitar picks used by “The Boss”, Bruce Springsteen, during an Adelaide concert.

Christopher Graham loves music, and he loves guitars. Among his most prized possessions are two guitar picks used by “The Boss”, Bruce Springsteen, during an Adelaide concert.

21-year-old Christopher lives with cerebral palsy quadriplegia, and the past few years have been tough for him with several health scares. However, he always has a smile on his face!

Christopher is a participant in the Day Options program at the scosa hub at Willaston, and also receives therapy services from the team at Novita’s Elizabeth hub.

In recent years he has started using eye-gaze technology to support his communication, and his amazing progress with this equipment earned him the President’s Achievement Award at the recent 2020 Novita Achievement Awards presentation.

The Award is presented annually to a Novita or scosa client of any age who lives with physical or intellectual disability and has made outstanding progress in their rehabilitation.

He was nominated for the award by Novita speech pathologist Kayleigh Bedford, who has worked closely with Christopher on his communication skills.

“The eye-gaze equipment has a camera that tracks Christopher’s eyes, allowing him to dwell over symbols for communication, or to do other things like selecting music to play or You Tube videos to watch,” says Kayleigh.

“We initially requested a 12-week eye-gaze trial for Christopher, but he took to it straight away and was able to tell us that he wasn’t feeling well, which we could deal with immediately, and he was super happy with that, so we went straight to a prescription.

“I nominated Christopher for the Award because he’s made huge leaps and bounds with the eye-gaze system. He picked it up like an absolute champion. I’m really proud of Christopher and the achievements he’s made with his eye-gaze.”

David and Janice Williams started providing respite care for Christopher when he was about 2-and-a-half years old, and they took over his full time care when he was eight.

David says apart from being an Adelaide Crows and Liverpool fan, Christopher has a great passion for music, which is probably the result of his grandfather being a guitarist and song-writer.

“He loves 60s music – Eric Clapton, Bob Dylan, Bob Marley are among his favourites. He also loves The Killers, and Bruce Springsteen of course,” says David.

“We went to see Bruce Springsteen at the Entertainment Centre, and we were at the back of the stage on the mezzanine level – where the wheelchair spaces were. As Bruce walked around the stage he pointed up at Christopher, so we waved back, and he pointed at us again.

“After the show two of Bruce’s roadies found us next to our van in the disability parking area, and told us that Bruce wanted them to try and find Christopher, and they gave him two guitar picks that Bruce had used during the concert.

“So Christopher has two of Bruce Springsteen’s guitar picks among his prized possessions. The roadies told us that Bruce would be rapped that we enjoyed the show.”

David says one of Christopher’s greatest achievements is his resilience.

“It’s the simple fact of how resilient he is, and how he bounces back all the time from all the adversity he’s faced during his life,” he says.

You can read more about the Novita 2020 Achievement Award winners here.